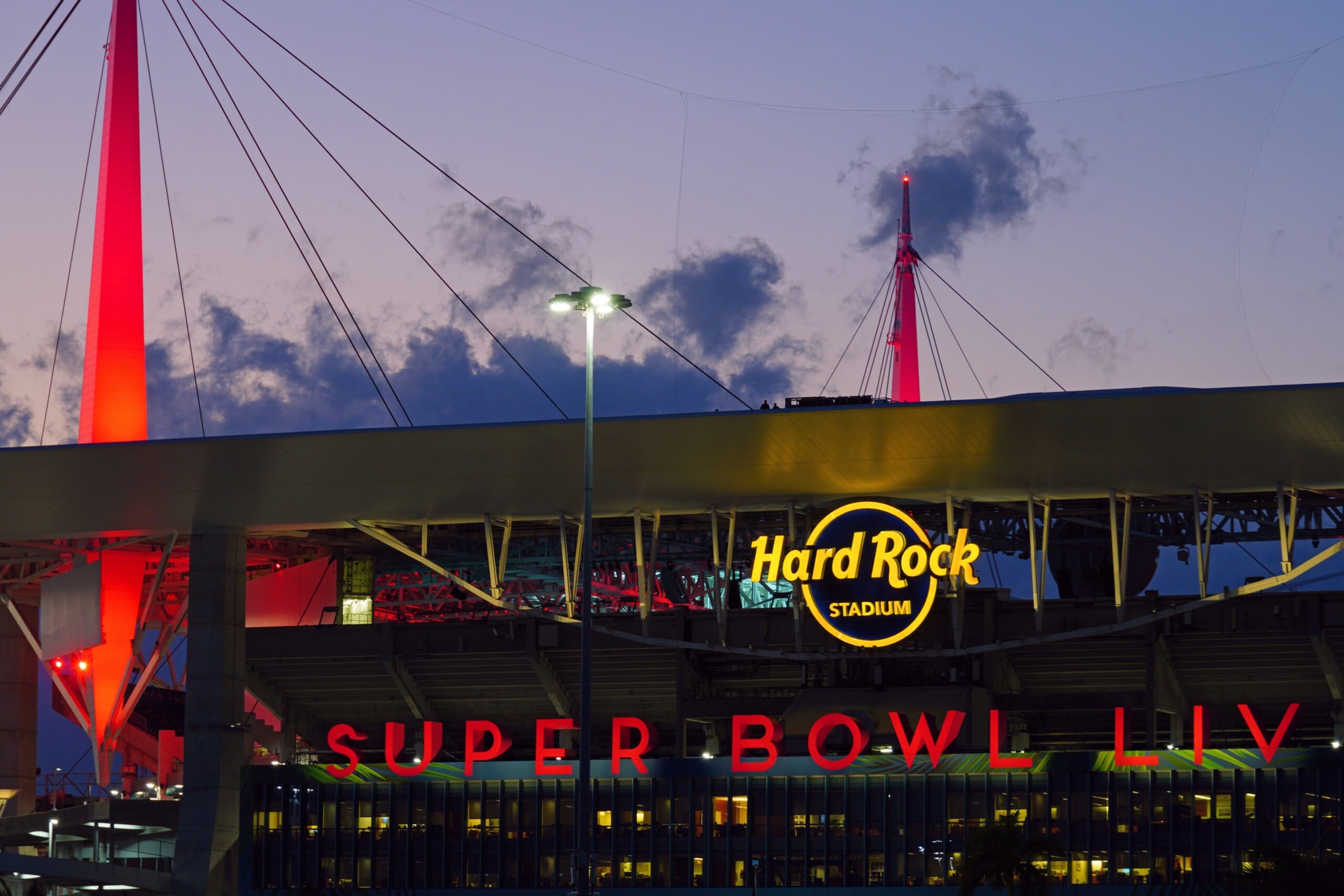 This entry was posted in Trending and tagged Trending on February 3, 2020 by Chad Lauterbach.

Technology in the Super Bowl

With the Superbowl over and all of us fans reminiscing the highlights of play and the low lights of this year’s stint of commercials, tech played a huge part in every fan’s NFL experience. The Superbowl is not only the most celebrated day in American sports, but the NFL continues to be a catalyst and international platform for new technologies to emerge.

With rapid advancements in the tech space over the past 3 decades, storing all of the data from each game, every player past and present, NFL contracts, stadium vendors, and employees is a behemoth IT undertaking. This data breakdown is quite common and what you would expect from any large business or enterprise, but some of the latest advances in data collection technology slamming the NFL servers in real time on game day are literally changing the way football is played.

NFL Chief Information Officer Michelle McKenna said in an interview with local Fox Station that collecting data on all players has a three-prong purpose: health and safety, game planning, as well as enhancing the fan experience.

From the shoulder pads and helmets, to the sticks and the goal posts, every component of the plays, the score, and the athleticism of each player is being tracked by embedded microchips.

Microchip tracking and data collection has been going on for several years, however new to the 2020 Superbowl the ability for fans to see stats, speed, and yardage on any player they hold their Wi-Fi enabled smart device up to. Think of it as an invisible QR code. Once a player is recognized through the camera, their stats- even in the middle of a play- will display on the screen of their phone or tablet. When Harrison Butker kicked a field goal to give the Chiefs the lead in the first half of the game, fans with their phones on the player could see the yardage calculation of the goal as it was happening. If they were scanning Damian Williams running for the 4th quarter touchdown to seal the win for the Chiefs, they saw how many miles per hour he ran as he was closing in on the end zone.

For those lucky enough to be sitting in the Hard Rock Stadium, seeing these stats is possible because they are tapping into one of the most advanced Wi-Fi network infrastructures in the world. Thanks to Cisco’s Connected Stadium Wi-Fi, congestion on the network will be kept to a minimum.  Extreme Networks will be handling the data collection and analytics.

Both AT&T and Verizon have invested heavily into making the Hard Rock Stadium and Miami’s surrounding areas outfitted with the latest wireless telecommunications technology. The $165,000,000 investment between the two communication giants was required to ensure that not only fans could snap their selfies to social media without a hitch, but also ensure that emergency personnel could respond within seconds with the upgraded network speeds.

Two-hundred thirty miles of fiber-optic cable installed in and around the stadium as well as small cell towers and DAS antennas for 4g LTE. 5G Nodes were installed inside the stadium to enhance the fan experiences with ultra-wideband service. 1,500 antennas littered the stadium seating area with 2,000 Wi-Fi access points. Verizon also outfitted surrounding cities and popular hotels with upgraded networks as well as installing 5G small cells in areas where other Super Bowl activities were held.

ATT also deployed Cell on Wheels also known as COWS around the stadium to beef up their network inside the stadium which carried 5G Plus capabilities. Satellite Cells on Light Truck known as SatCOLTs were placed in and around the stadium for Disaster Recovery purposes in the off chance of a natural disaster or major power outage that would disable the network. These units don’t require power or a physical connection as they work off of a satellite and a generator.

In addition to ATT and Verizon, all major phone carriers spent millions bolstering their networks to provide the fans the support they needed.

Superbowl IT and Event Security

With over 65,000 fans flooding the stadium, and an additional 6,000 employees, contractors, and NFL staff members under one roof, security is a top priority when planning out such a massive live event. Vulnerabilities in security can be in issue inside the stadium as well as any city blocks in the vicinity of the stadium. Though there are literally thousands of security protocols going on behind the scenes, security technologies are the foundation for all aspects of a successful public event.

Fusus is a relatively new product to the market- but is already revolutionizing how law enforcement and first responders plan and execute physical security in a large public event or in highly trafficked metropolitan areas. This Situational Awareness Platform provides livestream and GPS officer tracking for aiding in swift deployment and complete data integration at all first responder headquarters.

Public Wi-Fi networks are great and convenient for the entire Super Bowl experience, however we all know that an unsecured public WiFi network can be a gateway for thieves and cyberattackers– but just because this network is public, cybersecurity measures were put in place on the backend infrastructure to ensure fan’s information was safe from criminals- even on a publicly shared network.

The NFL is serious about fan experience, as they should be since the average price of this year’s Super Bowl tickets were fetching a whopping $9,000. Shelling out that kind of money for a single ticket comes with the ever-increasing expectation of entertainment brilliance. The demand for technology in entertainment keeps the NFL on the forefront of this niche in the tech industry.

Ever wonder how the instant replays with complete 360-degree views happen almost instantly during the commentary? This is made possible through Intel’s True View 3D replays. Between 30-50 ultra high end 5K cameras are installed around the playing field to capture every angle. The capture is immediately rendered into 3-Dimensional pixels called ‘boxels’ and transmitted into servers for use within seconds of the play. Analyzing every angle comes in handy reviewing controversial calls and praising nail-biting plays.

With the technology touching every aspect of our lives, one thing is certain: The music and entertainment industry has been on the forefront of pushing the creative possibilities. Companies have invested heavily in improving technology to catch up to artist’s imaginations that visually express their music. The unexpected X factor in a live music production always makes the show memorable and set apart from any previous show. Involving fans in the overall design of the production is one of the many ways lighting and production designers achieve those experiences.

We saw this magic during the Pepsi Halftime Show when Jennifer Lopez and Shakira hit the stage for the Pepsi Super Bowl halftime show, fans had illuminated Pixmob wristbands that lit on cue to be part of the performance. Each one of those wristbands have a radio transmitter and wirelessly connected to a DMX lighting console. On top of the wristbands, many of the lighting fixtures must run wirelessly as well. One of the other prominent wireless fixtures were the politically charged LED cages that housed children in the last few minutes of the show.

This wireless lighting is achieved on the ArtNet lighting network which allows multiple DMX universes to connect to each other or give the ability to connect multiple lighting consoles to accommodate the show’s needs.

A traditional, yet powerful WiFi network may also be used to connect these lighting products as well. No doubt the Lighting Designers were using this technology to pull off a perfectly synced and colorful display that also net the pre-production demands for a lightning quick set up.

What many fans don’t realize watching from home, is that it the production crew only has roughly 13 minutes to set up all of the staging as well as whatever portable wireless lighting and sound fixtures that need to be placed in and around the field. This means no time for setting up and taping down the long cables of traditional sound and lighting you would see at JLo’s Las Vegas Residency or even on Shakira’s last tour. The entire stage was also one massive LED screen, rolled out in pieces, and put together before the last commercial ends before the show can start. These also require wireless communication and spot on synchronicity.

Reps from our own Los Angeles Police Department were onsite learning first had what local emergency services planned and executed for this massive sporting event in preparation for the 2022 Super Bowl which will be hosted in the new So-Fi Stadium. Having the IT infrastructure on point at any of these events not only ensures security and safety, but also guarantees fans as well as staff, vendors, and emergency personnel that they have the technological backbone they need to pull of one of the biggest sporting events in the United States.

Many of the IT support and planning within the NFL franchise will come from their existing technology partners, but this event will undoubtedly bring local businesses and outsourced vendors plenty of projects and opportunities.

This is where having a Los Angeles Managed Service Provider here ahead of the big game will serve you well as you scale your business to meet the demands of Super Bowl 2022, or any other IT-related needs that come your way. Cyber Security, IT Support, Disaster Recovery planning, and Network Consulting are all things that we provide our clients here at Be Structured Technology Group. Contact Us to find out how we can support the security of your business today.