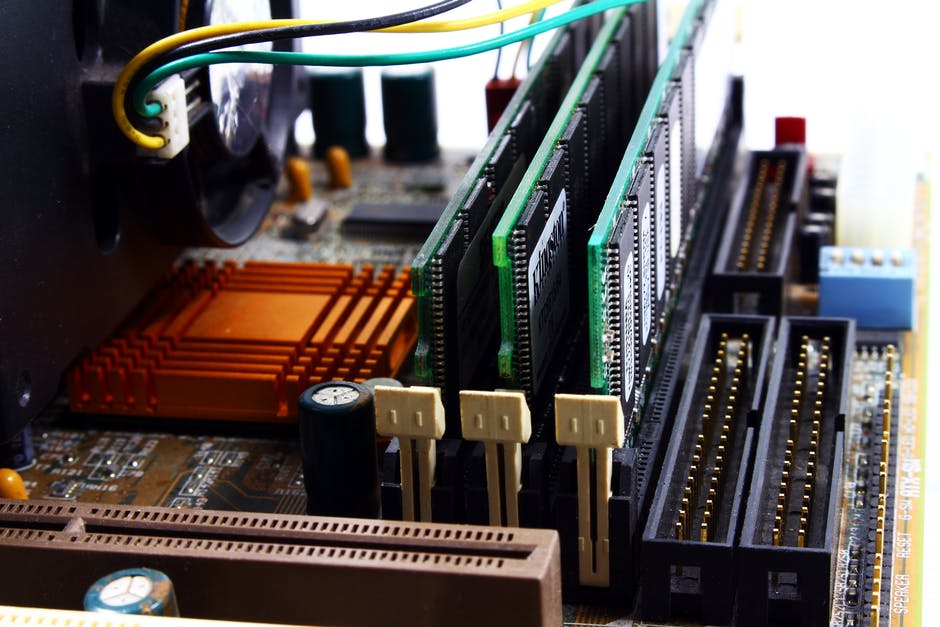 This entry was posted in Extra, IT Support, Managed IT, Security, Tips & Tricks on May 16, 2022 by Chad Lauterbach.

As time goes on, sufficiently protecting your company against cyber threats becomes more and more important. To clarify, the cybercrime industry as a whole is projected to be worth over $10 trillion before the end of the decade.

To make matters worse, the majority of this value will come from compromised business information. Interestingly, many entrepreneurs overlook the importance of hardware when it comes to sufficiently protect yourself against cyber threats.

The truth is that hardware is an integral part of a comprehensive cybersecurity strategy. Let’s take a look at all you need to know about it.

Hardware Is More Vulnerable Than You Think

As previously mentioned, it’s not uncommon for those who are in positions of power to neglect hardware vulnerabilities. When it comes to managing cyber threats against your business IT services and security, hardware is one of the most important factors to consider. Although not quite as common as other forms of cybercrime, a hardware attack can prove to be crippling.

This is especially true if your organization is unprepared to handle one. Recognizing this vulnerability is the first step toward establishing the proper level of protection.

What Exactly Is a Hardware Attack?

During a conventional attack, a hacker will use malicious software transmitted over a network to infect a specific machine. A common scenario involves sending someone a fraudulent email and coercing them into downloading an attachment or clicking a link.

Of course, this inevitably involves having the user install malware on their device. To differentiate between a software attack and a hardware attack, you can consider the following:

A software attack involves using applications to reach the end goal and also involves the instructions that are performed the attack.

A hardware attack involves the device itself.

Part of what makes this type of incident so dangerous is that you can’t implement a quick fix like you can during a conventional attack. To elaborate, the software can be updated, re-downloaded, etc., but hardware cannot be changed. A typical hardware attack involves a criminal integrating malicious software into a computer chip. This chip is then placed into a device in order to carry out the attack.

Part of what makes this type of attack so complicated is that it is virtually impossible to tell if you have a malicious chip until the attack is initiated. To make things even more convoluted, hackers often wait to trigger hardware attacks.

For example, the malicious chip may be set to activate on a particular day of the year. This date could be months from today. Attacks like these are facilitated so that a large number of machines are affected simultaneously.

As you might expect, hackers are also able to trigger infected ships by sending specific data to the device. A particularly complex scenario could involve hardware having a malicious GPS chip installed. Based on the instructions that the hacker set, the attack may only trigger if that device enters a certain geographical region.

It shouldn’t come as a surprise that overt attacks are fairly obvious to the user. Hackers choose these when they do not care about going undetected after the attack has been initiated.

They might also choose to make an overt attack if they wish to intentionally disrupt or impair the use of the device. Hardware that is particularly vulnerable to overt attacks includes military technology. Under scenarios like this, the hardware may or may not be able to function correctly during a time of need.

In contrast, covert attacks are meant to remain as clandestine as possible. More often than not, the purpose behind this is to exfiltrate as much data as possible. An ideal situation for a cybercriminal would be to monitor an infected device at a financial institution.

Over time, they would slowly begin to procure valuable data. Due to how lucrative information like this can be, hackers tend to prioritize certain types of businesses. These include those in the healthcare, tech, finance, and telecommunications fields.

It’s worth mentioning that there is also a third type of attack that hackers tend to carry out. As previously mentioned, infected GPS chips could be activated when the device enters a certain area. This type of attack allows the device to continue operating but modifies certain data on the device.

In this context, the device would function normally but would trigger the malware on the GPS chip when certain parameters are met. This method could be used in a multitude of other ways.

A common scenario might involve an infected chip facilitating backdoor access to a device. The hacker could then send malicious software to the device through the opening created by the malware on the computer chip.

How Does Chip Complexity Affect Vulnerability?

Many people tend to believe that more complex chips are harder to compromise.

In reality, the inverse is true. As chips become more complex, they began to exhibit a larger number of vulnerabilities. However, this isn’t the only factor at play.

As chips become more and more complex, manufacturers need to add more power to smaller components. This means that the teams working on them grow larger and larger. In the past, a small, dedicated team was the only group of people that worked on chip design and manufacturing.

Today, hundreds or even thousands of people could be involved. This means that it is easier than ever before for someone to compromise the integrity of a computer chip and install malware on it.

This is further complicated by the fact that a large number of contributors from third-party groups have no personal stake or interest in how the chip performs. This means that they have virtually no reason not to compromise a chip if they desired to do so.

This results in a large number of complications during chip production. Teams should be sufficiently vetted and selected before they can contribute to a project.

What Are the Challenges Associated With Hardware Security?

There’s a large number of different challenges associated with hardware security. Cyber threats aren’t the only ones to consider, either.

Let’s explore some of the most notable challenges associated with establishing hardware security.

For those who do not have a grasp of the computer chip creation process, it’s virtually impossible to install malware during the manufacturing segment.

This is due to the fact that the chip has not fully been created yet. To help put this in perspective, imagine distributing malware to a computer that has not been put together. It simply doesn’t work.

As the design process becomes more expansive, we encounter issues similar to the ones mentioned before — a larger number of hands being involved in the overall creation of the chip. Some people might be confused about how such a complex device could be worked on by such a vast number of people.

Although the end product contains many different nuances and functional areas, it’s comprised of segments known as blocks. It’s possible for dedicated teams to be responsible solely for creating a single block. This means that different teams are outsourced across the entire world to design a single chip.

In practice, a US-based company might outsource to multiple countries within Asia for different responsibilities. This is primarily due to the fact that the cost of labor in this region is much lower than in other parts of the world.

One of the biggest risks during scenarios like these is having the outsourced company intentionally provide a corrupted chip design. Something that is more likely, though, is having that company insufficiently protect its intellectual property.

If the third-party company does not properly secure its cloud servers, for instance, hackers may gain access to design data. Under the right circumstances, these criminals may be able to alter or corrupt the chip design without the third party’s knowledge.

Of course, it’s also possible for someone within the organization itself to be responsible for chip corruption.

Proper training can eliminate a large number of issues.

However, it isn’t exactly easy to train hundreds of different people across many different teams. Companies that are involved in chip design should be highly protective of the information that they disseminate. Anything that they tell a third party should only be done on a need-to-know basis.

This means that chip designers should only know information that is relevant to the task at hand. Someone working on the portion of a chip that handles video display, for instance, doesn’t need to know anything about how the chip will interact with wireless devices. Chip design companies should also acknowledge the very real threat of a hardware attack.

This is something that is not even considered by many organizations. However, it is just as dangerous as a conventional malware attack. To help facilitate this, internal training should be conducted about how to properly interact with outsourced clients, data storage, etc.

The Challenge of Sufficient Testing

It’s much more difficult than many people believe to detect corrupted chip designs. Although testing occurs during the design and manufacturing phases, this primarily focuses on performance.

It does not necessarily look for all potential security threats. Unfortunately, this creates a situation where design firms may initially believe that there are no security risks. There are also scenarios in which a hacker will send highly specific information to a device in order to trigger an attack.

In a situation like this, the chip could be tested hundreds of thousands of times and still produce no indication that anything is wrong. As you can tell, this creates a highly complex situation that is not easy to overcome.

Fortunately, corrupting chip data isn’t exactly easy. It requires a large number of factors to align before anyone has a chance of doing so.

How Can I Protect My Hardware?

In order to protect hardware for your business, you will need to stay aware of ongoing trends in the industry or hire a local IT support company to stay on top of new threats for you. If any information comes out about particular chips you use within your devices, it’s imperative to take action immediately. This is particularly true if you work in an industry that is considered high-value by hackers.

This also means that you should prioritize devices that have chips with integrated defenses. As time goes on, chip developers are becoming more efficient at detecting threats and automatically thwarting them.

Of course, there is always the concern of protecting hardware at your company. Properly training your teams and keeping an eye out for suspicious activity by employees can go a long way when it comes to keeping the hardware at your organization uncompromised. Even a single incident could result in a data breach that causes a large number of complications.

To elaborate, let’s assume that an employee intentionally corrupted information on devices at your facility. You run the risk of experiencing extensive downtime, which can translate into reduced sales. You might also experience a blow to the reputation of your business.

Put simply, you need to prioritize hardware security as much as you would software security. Keep this in mind when moving forward so that you can stay as protected as possible.

Considering Hardware Is Essential For Your Cybersecurity Strategy

Otherwise, you may fall short when protecting your organization. As long as you develop a comprehensive cybersecurity strategy, you are unlikely to encounter major issues down the road.

Want to learn more about what we have to offer? Feel free to get in touch with us today and see how we can help.